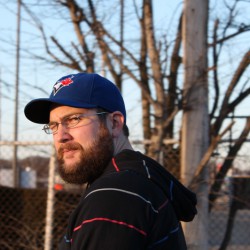 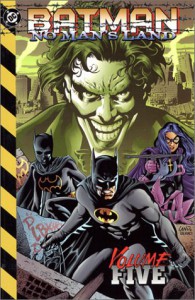 Not that it was really all that necessary, I did enjoy the flashback in the beginning. An attempt to better fill in some backstory involving with Huntress and Batman's absence was appreciated.

A lot happens in this fifth and final volume but it never feels rushed or convoluted. The pacing is excellent and in all 5 volumes, this is easily the strongest. While I had a small problem with the way Lex Luthor was used, he was sorely needed in an attempt to bring No Man's Land to an end. While his plan was pretty devious, he should know better that you can rarely get something like that by The Batman.

Volume 5 has one hell of a Joker appearance; one of the best I've ever read. Despite the fact that this has been repeatedly cemented within the Batman mythos, Joker is clearly Gotham's most dangerous villian. Joker not only wreaks havoc here, he throws Gordon's world upside down once again with a pretty shocking event. It totally makes up for the lack of Joker throughout the five part arc.

There was something I read not too long ago that basically concluded that Batman is not Bruce Wayne's alter ego; it's the other way around. It becomes evident in this collection when Bruce is seen muttering, "I don't want to be here. I need to be there. I hate this". He uses Bruce as a means to an end and only when necessary. If he could live in that costume, he would.